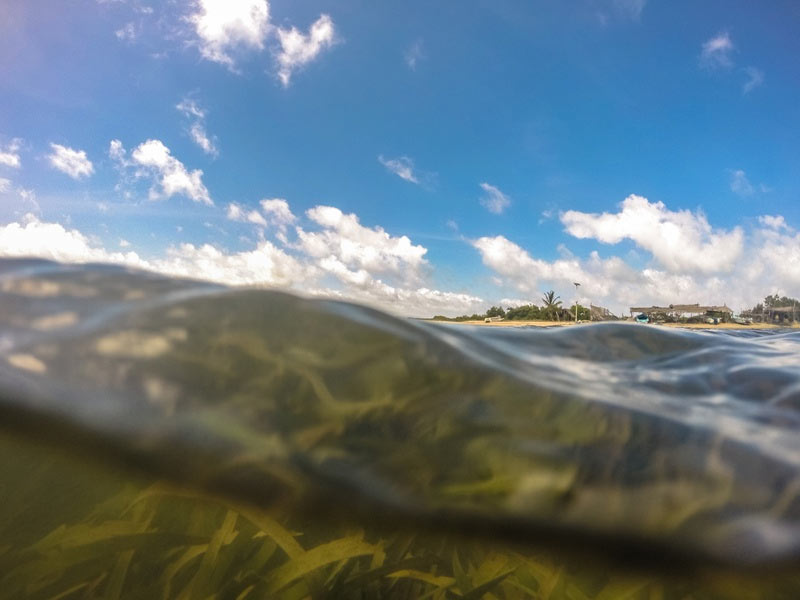 At the end of August I spent 10 days conducting fieldwork in Pattalam Lagoon, which is situated in the north west of Sri Lanka. The purpose of my visit to Puttalam Lagoon was to set up socio-economic and fish landings surveys with a research collaborator, who will now complete the surveys. This research was undertaken to contribute to a growing database covering South East Asia and beyond, linking seagrass meadows and food security, by using Sri Lanka as a case study.

The lagoon was fringed with seagrass meadows and populated by many dense mangrove islands.

Before the trip, I had profiled the area to gain some understanding of the people, the environment and the lagoon itself – which was once a tropical paradise. However, upon arrival I was faced with shock at the sheer size of the lagoon, measuring 327 km2, which was once surrounded by dense mangrove forests. From the onset it was clear that much of the once rich mangrove forests had been removed to make way for coconut plantations, salt production, rice cultivation and most notably shrimp farms – an industry that would be dominant throughout my findings.

For the duration of my trip I was based in Kalpitiya, a relatively small, but densely packed town with a population just shy of 65,000. A large proportion of the population are refugees, whom fled Mannar in 1990’s when Tamil Tiger militants ordered them to leave or face death, and although they have lived in the area for over 20 years, many still desire to return home. 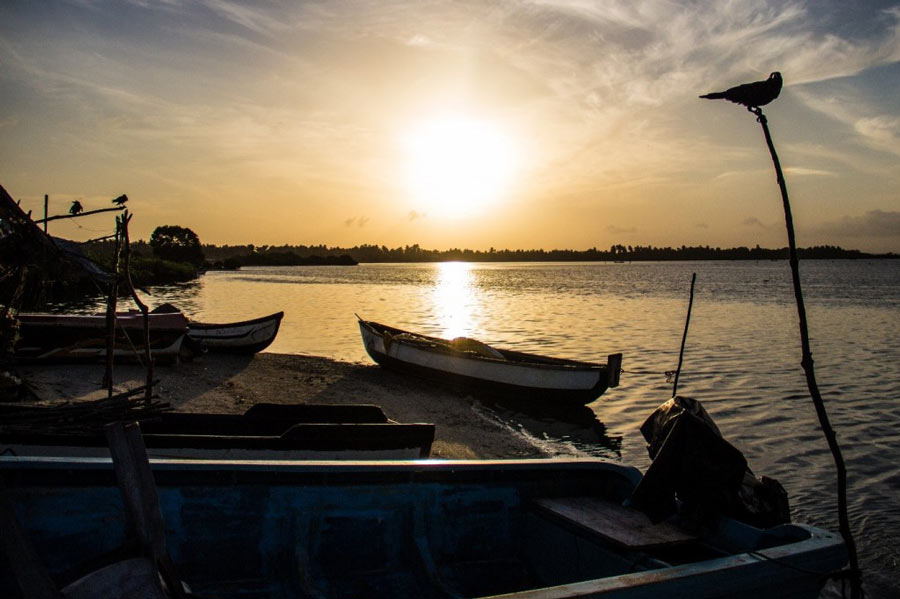 Early starts. 5:30am at Oththakanna, the smaller of the two landing sites.

Due to the nature of the research, which was split between landing surveys and household interviews, I was fortunate enough to spend much of my time with the large and lively fishing community where I focused on two very different landing sites. My day’s started early, meeting the fishermen at around 5:30am, just as they were returning to the landing site after collecting their catch. The first, more traditional landing site, where fishers mainly targeted shrimp, was made up of around 60 fishers and a small, coconut leaf hut, known locally as a Wardiya, was the focal point of the site and was used to weigh and sell shrimp. The second landing site was larger, fish were always the target species and had a strong community sense with a large number of older fishers helping to sort individual catches, which on some days were in excess of 400Kg. 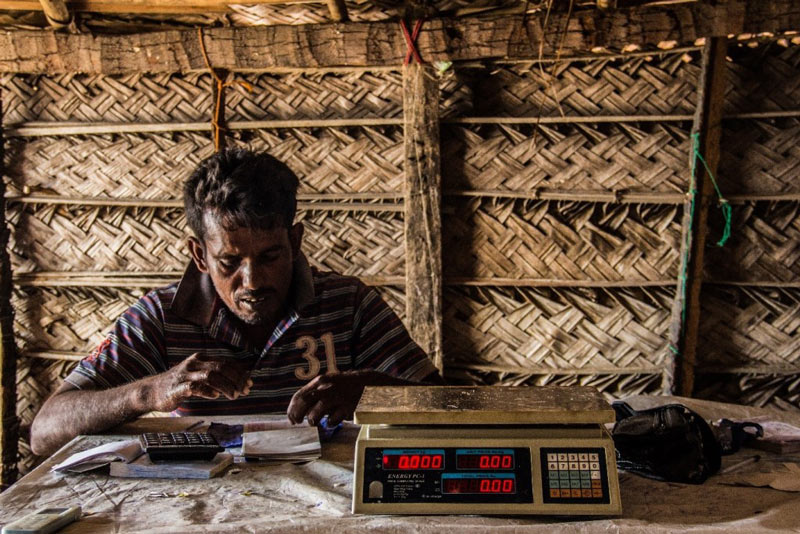 Upali ran his Wardiya very strictly, and all sales were weighed and recorded.

At the smaller landing site, Oththakanna, it was clear that seagrass played an extremely important role in the fishery – “We catch more shrimp in seagrass” said Upali, the owner of the Wardiya, “Without seagrass, I would not be here”. Even though this was the case and all fishing occurred in seagrass there, the very nature of the seagrass shrimp fishery will be its downfall, with high levels of illegal fishing, most of which is damaging the seagrass. It was clear that fishing was primarily a source of income and not food, with extremely high and unregulated by-catch and fisher’s targeting shrimp only. Any shrimp that were caught were sold to a middleman whom would drive from up from Colombo, load up his ice filled truck, and then return to Colombo to prepare the shrimp for export. In some cases, over half the catch was discarded and numerous juvenile fish, including groupers, snappers and emperors, all highly valued sources of food at other case study locations, were either thrown to dogs and crows, or left on the beach. Of the by-catch species, seahorse are the only highly valued species, which can be sold to tourists for a high price. Yet the level of appreciation for seagrass, and the fishers desire to halt the use of illegal fishing gears gives some hope for the future. 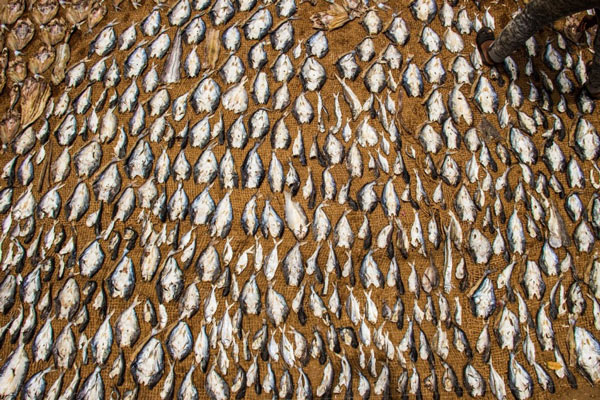 Catfish caught in the lagoon were mainly salted and dried – a cheaper source of protein than fresh fish.

The larger landing site, Wannimundalama, was completely different with traditional non-motorised boats being replaced with more modern fibre glassed boats with outboard engines. The fishing was different too, and shrimp were no longer the target. Instead, net fishers targeted sardine, and in the majority of cases, this was all they caught. In some cases, catfish were also caught, but instead of being sold fresh, these were salted and dried. The fishing at this site was effective and a real community effort, with the men conducting the fishing, and women de-scaling and gutting the fish as soon as it was landed. Still, seagrass was appreciated for its value as a nursery area, and again fishers knew that if it was lost, they would no longer be able to fish.

Although the data only displays a snapshot of the lagoon fishery, it is hoped that with continued research we can gain a deeper understanding of its complexity and begin to work with the fishers to minimise the impact their fishing is having on the seagrass meadows there. It wasn’t all doom and gloom, and I left hopeful as the fishers welcomed me into their “fishing family” and began to make an effort to return any live by catch to the sea – much to the dog’s disappointment. 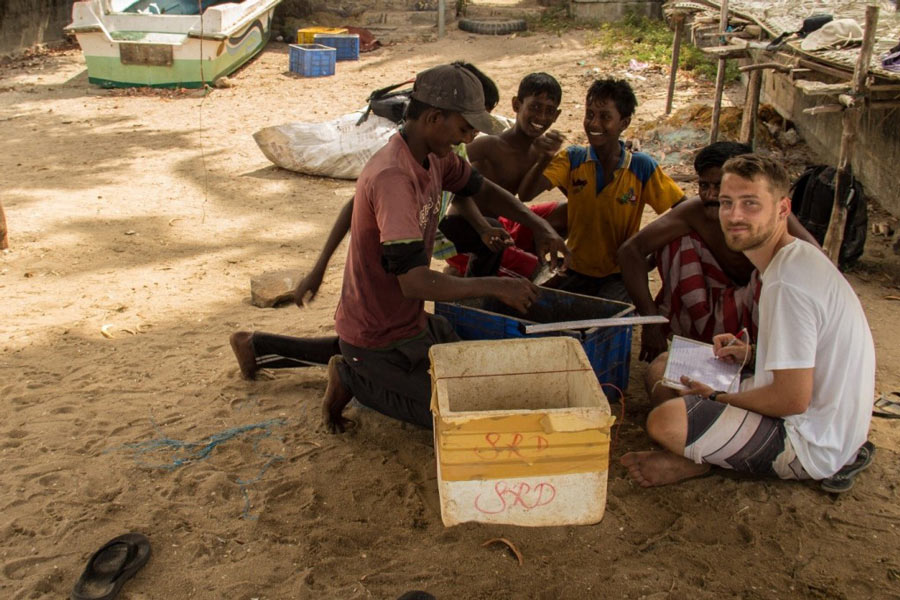