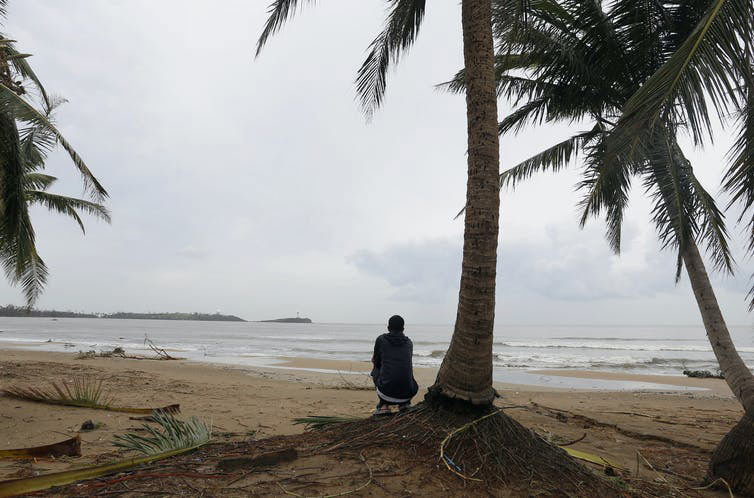 Hurricane Irma – one of the strongest on record to hit the Caribbean – recently scoured the islands leaving catastrophic damage in its wake. And just as we began to piece together the devastating and potentially long–term impacts of Irma, Hurricane Maria has now left another path of destruction. Puerto Rico, the British dependency of the Turks and Caicos, and many other Caribbean islands have suffered what have been described as “apocalyptic conditions”.

When the world talks of the tragic and devastating consequences of severe hurricanes, the focus tends to be on the land, and the people who live in affected communities. Indeed, nearly 30 people have been reported killed, while Puerto Rico Resident Commissioner Jenniffer Gonzalez has said that the hurricane has set the country back by “20 to 30 years”. We see images of toppled trees, torn off roofs and severe flooding. But marine environments can be also badly affected by hurricanes, with potential long-term effects.

The force of hurricane winds, and the resultant tides and waves are so strong that both plants and animals are ripped from the sea floor leaving lifeless rubble and sediment behind. Hurricanes have a washing machine effect: they mix up coastal sediments with knock-on effects for marine life. Suspended matter left floating in the water column limits the amount of sunlight that reaches marine habitats and so reduces growth and recovery. Meanwhile in shallow coastal environments, debris, sewage and run-off continue to flow in to the sea long after the hurricane has passed.

Human dependency on the sea 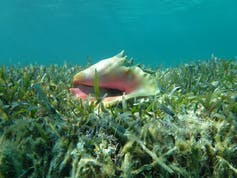 The fishery for Queen Conch (Strombus gigas) is a major source of income to many around the Caribbean.

The devastation of coastal environments, particularly seagrass meadows, can also result in long-term losses of the benefits that humans receive from them, such as fisheries support or coastal protection. Damage to these ecosystem services consequently impacts human well-being, because people can no longer rely on them for their livelihood and food supply.

Some of the most severely affected areas of the recent hurricanes in the Caribbean – Florida, Turks and Caicos, Puerto Rico, Cuba and the British Virgin Islands – all house extensive seagrass meadows. These shallow water marine habitats support valuable lobster fisheries, as well as shrimp, conch, and finfish fisheries. Seagrass also stabilises sediments and protects the white sand beaches that attract so many tourists to the region.

Previous hurricanes, cyclones, and typhoons (weather events which are essentially the same but have different names depending on where the storm happens) across the globe have shown the severe negative effects they can have on these vital seagrass meadows. The seagrass plants are ripped up or buried under sediments, leading to their suffocation. The extensive associated murky water leads to widespread loss of seagrass, as was seen in the years that followed hurricane Katrina hitting the US.

Initial indications from the Everglades in Florida show that seagrass destruction in the wake of Irma is extensive, with large piles already being washed far onshore. This should ring alarm bells for Caribbean fisheries, as hurricanes Katrina and Rita led to losses in the seafood industry that reached billions of dollars. The Caribbean spiny lobster fishery business alone is worth more than US$450m, and directly employs 50,000 people. Healthy seagrass provides the best fishing grounds with the greatest revenue, and the recent hurricanes have the potential to decimate this.

But this is not just about money. Seagrass loss also threatens marine biodiversity and the health of charismatic species. After a severe cyclone in Australia in 2011, turtles and dugong starved due to the damaged meadows. In addition, seagrass is a marine powerhouse, which stores vast amounts of carbon in meadow sediments. When the seagrass is removed, this carbon is released back into the environment. 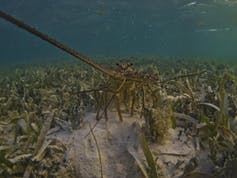 Caribbean spiny lobsters depend on clams they find in seagrass.

Hurricanes have always been a part of life in tropical seas. The destruction they cause and their recovery have been observed throughout human history. What is alarming now, however, is the apparent increased frequency and intensity. The already poor state of the Caribbean marine environment restricts the ability of habitats such as seagrass meadows and coral reefs to recover from the effects of severe storms. Poor water quality and over-fishing, for example, promotes the overgrowth of algae, preventing recovery. With repeated hurricanes occurring over time periods that are insufficient for recovery to occur, this will only get worse.

The severity of hurricanes Irma and Maria are a wake up call. We need a fundamental shift in how marine environments are protected to enable long-term sustainability for the food and income they provide. Many locations in the Caribbean, for example Puerto Rico, have ineffective marine protection rules and so destructive practices continue unchecked, meaning that when a disaster does occur, the environment is unable to recover.

Although local actions against climate change are difficult to achieve, it is possible to manage river catchments to improve water quality, and focus on small scale immediate actions, such as implementation of marine protected areas to limit immediate and direct damage to coastal resources. Coordinated small scale actions will ultimately help enhance the resilience of the Caribbean Sea, and make sure that the environment can better recover from any future extreme events.