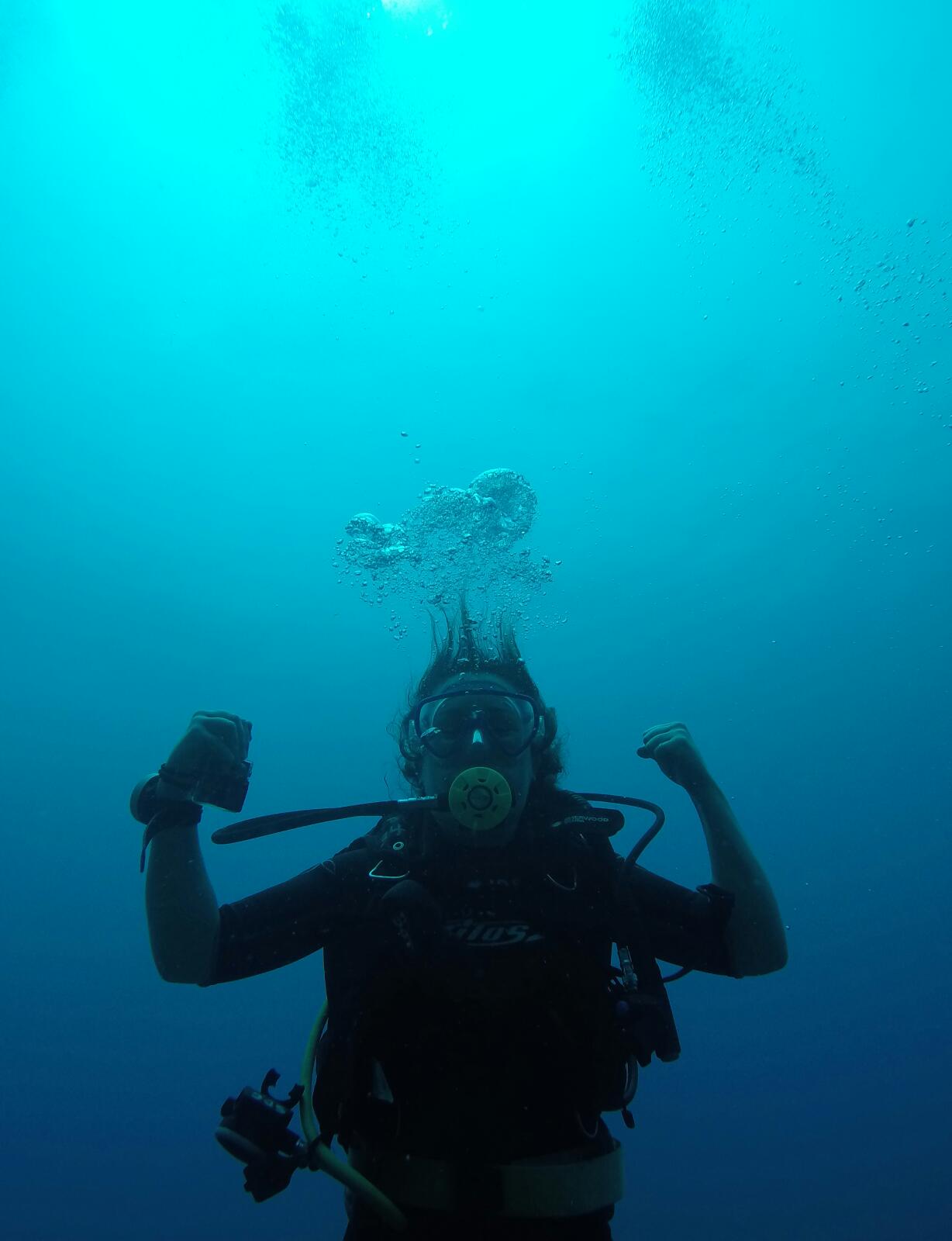 Marine Biology And Me 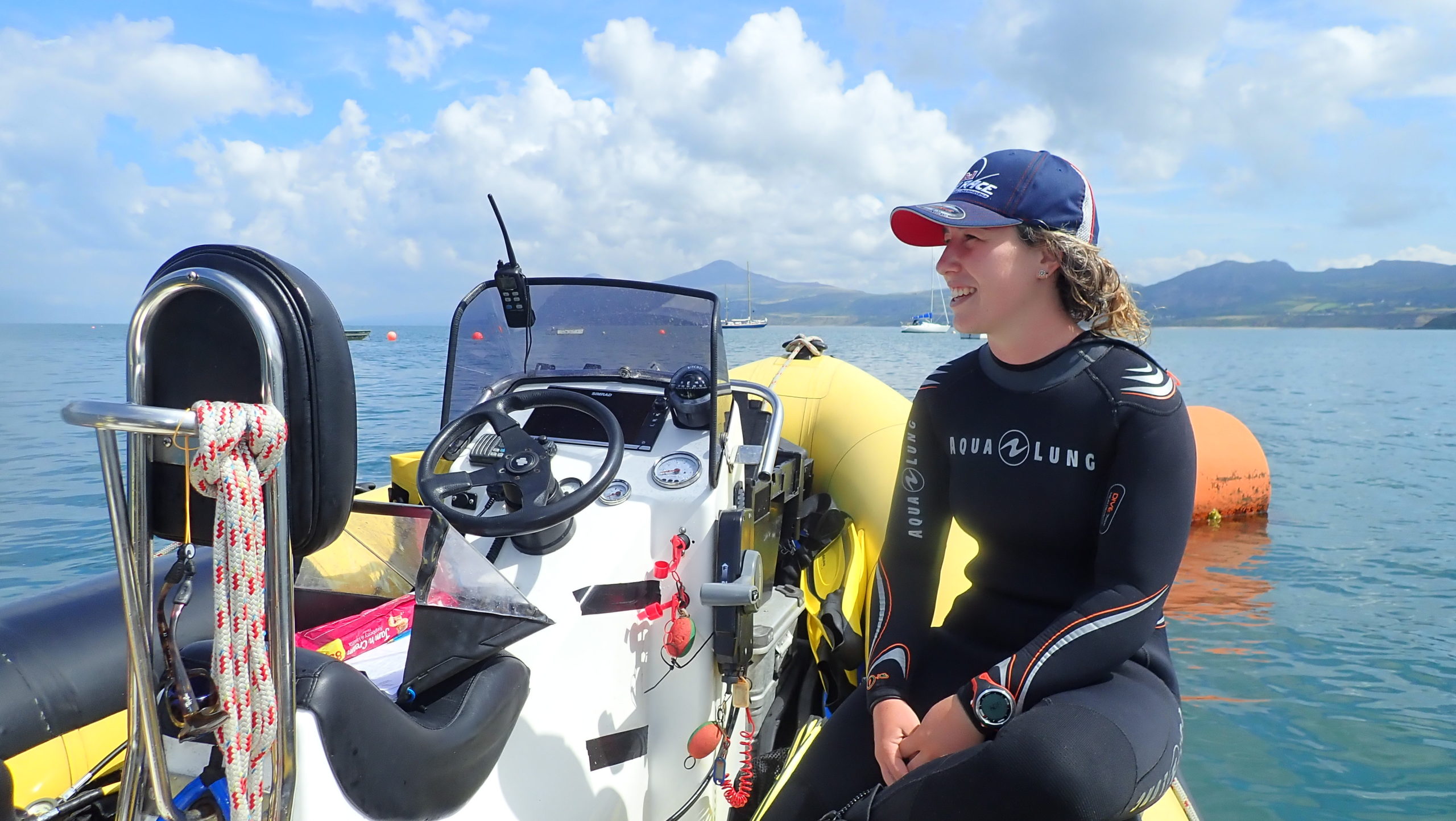 It wasn’t a natural calling. It wasn’t a passion from birth. I was always going to be a baker until I was going to be a nurse, a psychologist, a social worker, a midwife, a nutritionist, a mathematician, etc, etc. So where did marine biology come in?

Donning three wetsuits and some scuba diving gear I jumped into Wraysbury quarry pit. The noise of Heathrow airport and a chaotic world disappeared, a peaceful adrenaline kicked in. I turned to check my buddy was ok but all I could see through the murky water was their hand. Was there a body attached to the hand? Was I going to survive my first attempt at scuba diving? Either way I was hooked.

So, my many different career paths got put on hold, where I think they might just stay. Instead of university I packed my rucksack in search of dive sites. I saw the bright red lipstick of puffer fish in New Zealand. The manta rays and turtles of Fiji. The complete lack of life on the Great Barrier Reef. Where was the crunching of the parrot fish, the popping of the reefs? I’d been as a child to these psychedelic waters, yet now, 10 years on, the Great Barrier Reef was plain. I wanted to know more.

Four years later I had ticked off a first-class (I still don’t believe it!) degree in Marine Biology with a year in industry (Project Seagrass!). Along the way I gained experience in the South African bush, of fieldwork on the UK coast, a boat driving license, tropical fieldwork in Jamaica, diving trips all around Wales as well as Belize, Portugal and Tenerife, all accumulating to a BSAC dive leader qualification and of course I gained a love for seagrass.

Straight out of my last university exam I got lucky with a technician job for SEACAMS2 where I spent the summer on boats. I was frequently jumping in the sea to hand catch jellyfish, my face and hands tingling with the stings. We jotted up and down the Gower coastline working with echosounders, fishing nets and CPODS. The sun started to fade and as winter arrived I found myself up to my elbows in well over a thousand fish guts looking at Herring spawning stocks in west Wales.

All that stink and I was ready to scooch off and away again- there’s too much ocean to explore to sit still. I swapped a fishy lab for the incredible fish life of the Indo-Pacific. I ticked off some major marine bucket list moments (think thresher sharks, oceanic manta rays, whale sharks, pygmy sea horses, wobbegongs and countless fish and invert species- Nudi’s are downright awesome!). Most importantly I ticked off my PADI dive master, where I gained a love for muck diving- the buzz of finding the tiniest most cryptic of critters. 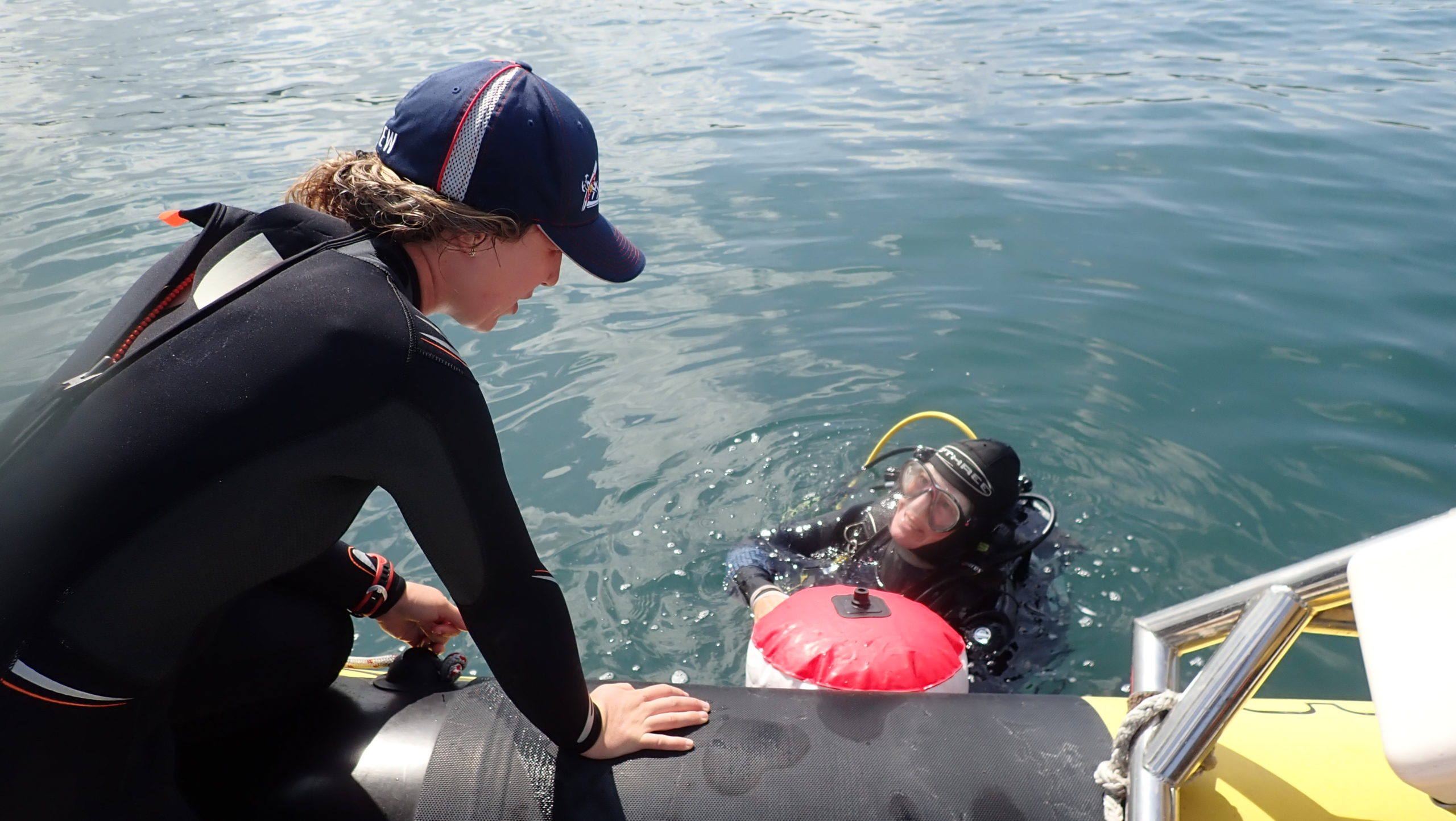 This time the travels were cut short but for good reason- Seagrass Ocean Rescue. Throughout school and university, I’ve worked various part time jobs, all of which related to kids or confectionary. This combined with my growing experience of the underwater world, I had the beginnings of the skill set needed to take a lead on the outreach of the project. Basically, I can clown around in front of kids and have so far persuaded nearing 2000 of them that seagrass is worth shouting about. That it’s worth them rolling up their sleeves to help us plant a new meadow. I can also make a mean chocolate brownie, perfect post seagrass dive treat. So here I am, working on a project full of ocean optimism with an energetic awe-inspiring team to plant a seagrass meadow. My other career paths stayed on hold. Was I right? Well, the only career advice I can offer is don’t rush, one day you’ll also realise that everything’s better at sea.