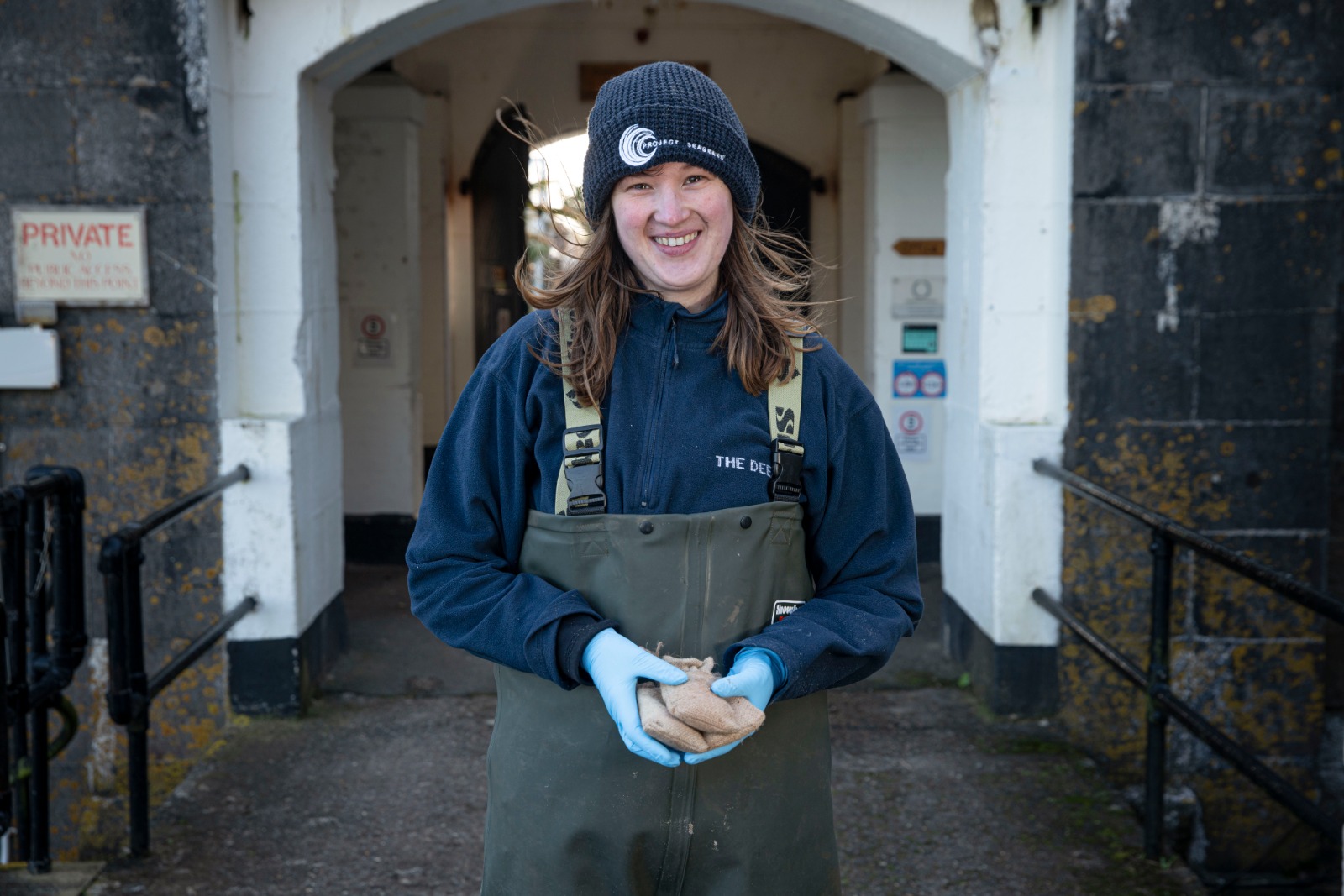 Elise and myself look after all the native marine species at The Deep, an aquarium in Hull. I’m very new to all things native having previously worked with penguins and tropical fish but Elise is a pro, thankfully accepting me as her apprentice. We first heard about the work of Project Seagrass and Swansea Uni when Elise went to the National Aquarium Conference (NAC) in late 2019. From there we attended the first BIAZA seagrass focus group meeting organised by Sam and only a few weeks after that we set off on the train to Wales. The seven hour journey was very much the calm before the storm but what a wonderful, happy storm it would prove to be.

The scale of the work to be achieved in the week was imposing but equally impressive was the effort carried out to get to that point. Twenty thousand small bags had been filled by a small army of school children, volunteers and the dedicated project team before being hand tied to twenty kilometres of rope ready to be planted. Alongside that was the harvesting and preparation of the three quarters of a million seeds that would go into the bags. This doesn’t even touch on the logistical work carried out to put everything in place. During the week each rope, 100m long, would be laid to restore seagrass over an area of one and a half football pitches.

Day one was spent loading the vans in typical Swansea rain with all the equipment needed and prepping the two boats (Calypso and Zostera) that would be used before driving down to Dale and getting everything set up for the week ahead. This was when the true scale of the project hit home, stepping into the library at the fort and seeing the piles of boxes containing the prepped bags and ropes. Watching this pile shrink through the week was immensely satisfying as it was a clear visible indicator of the fantastic work being done by everyone involved. 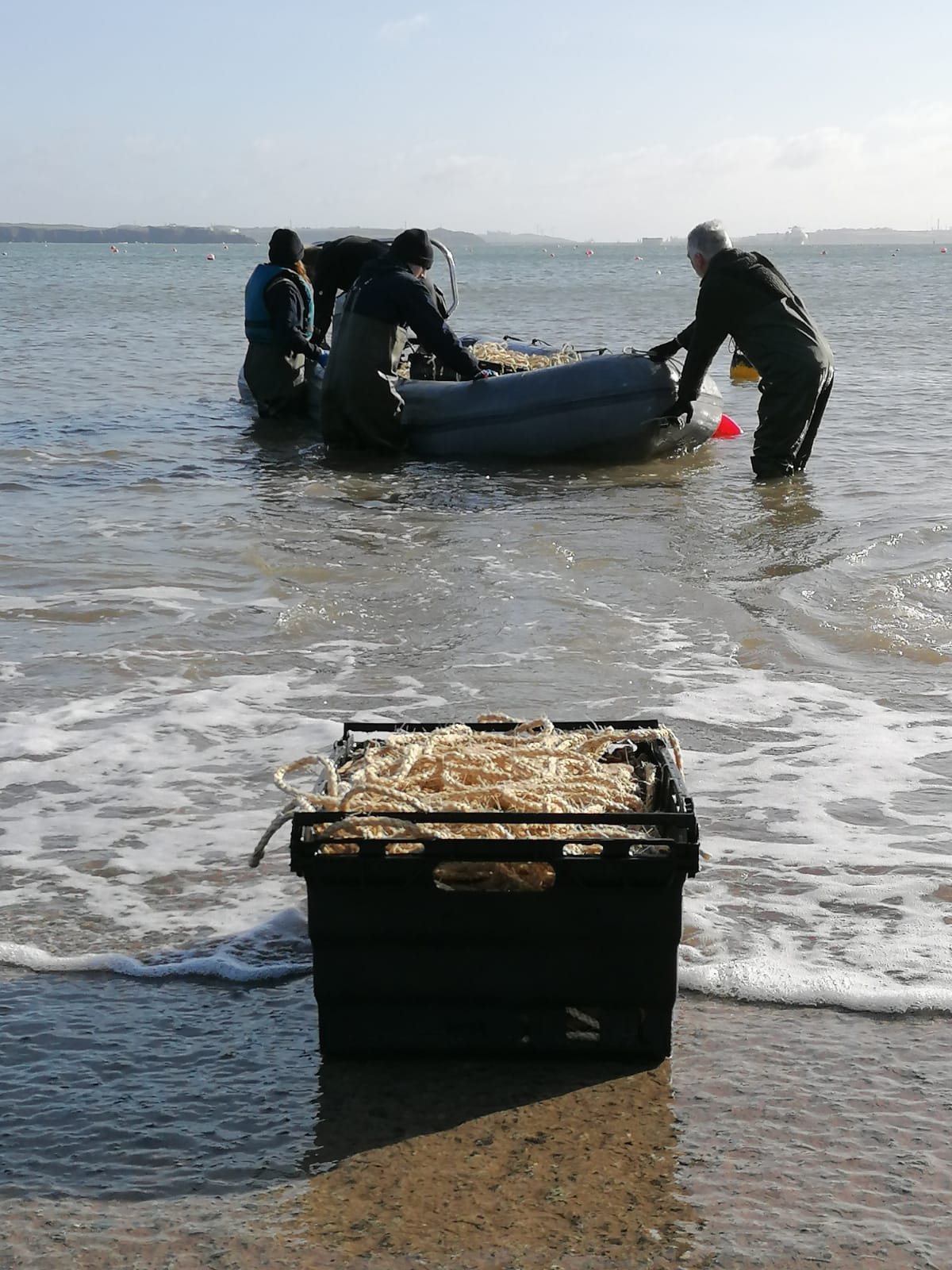 The first task we were involved with was prepping the individual crates to be sent down to the boat for laying. This involved untangling the ropes, filling each bag with around fifty seeds, topping them up with sand and adding some water before coiling them again for soaking. This work was completed in small teams of between three to six people, the composition of these teams was always changing as different volunteers arrived each day and people swapped in and out of different jobs in the bigger picture. What never changed was the amazing work atmosphere and efficiency with which the process was carried out, fuelled by a constant supply of tea, cake and music. The opportunity to spend so much time working and chatting with such an amazing group of people will live long in the memory. 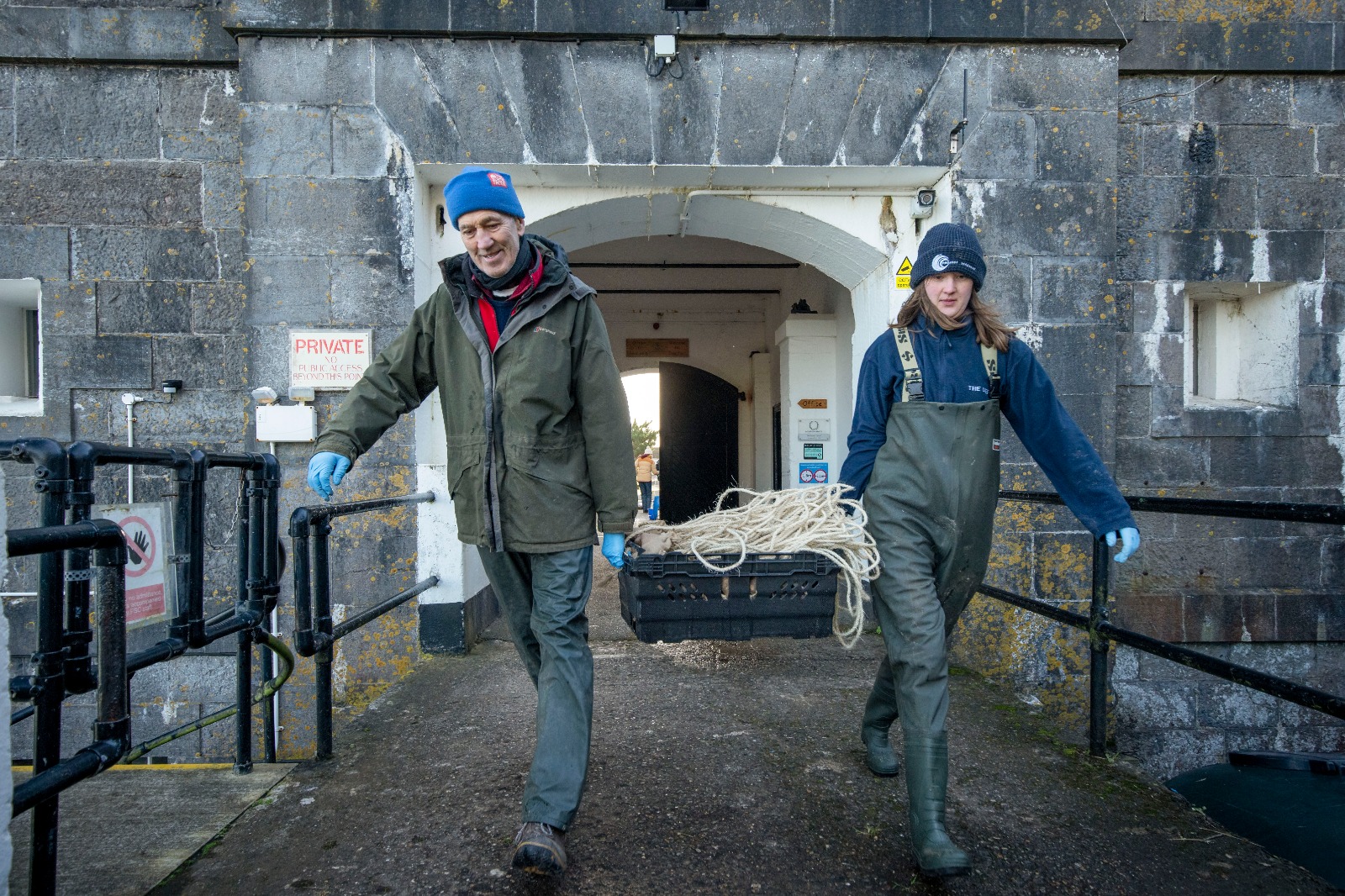 The bag filling was paused every now and then by trips to the beach with the completed crates containing the seeds to load into the boats. As energy levels dropped through the week the work ethic of the team really shone, sharing the load of the heavy crates and sand bags. Work by the boat team was almost continuous as more and more lines were laid, one quick break being met with some well-deserved pea and ham soup from the locals.

By Friday all targets had being met with seven hundred and fifty thousand seeds planted and the library empty of boxes. Everything was tidied up and it was time to head back to Swansea for a warm shower, a takeaway and a good sleep. Sitting down after pretty much non-stop activity allowed time to reflect on all that had been achieved and how much of a pleasure it had been to do our bit for the environment alongside such a great group of people. We are both so grateful that we were able to be involved and can’t thank Project Seagrass enough, very much looking forward to the day where we can go and see the seeds growing and the positive impact the project will have had on local diversity.