One man went to sow 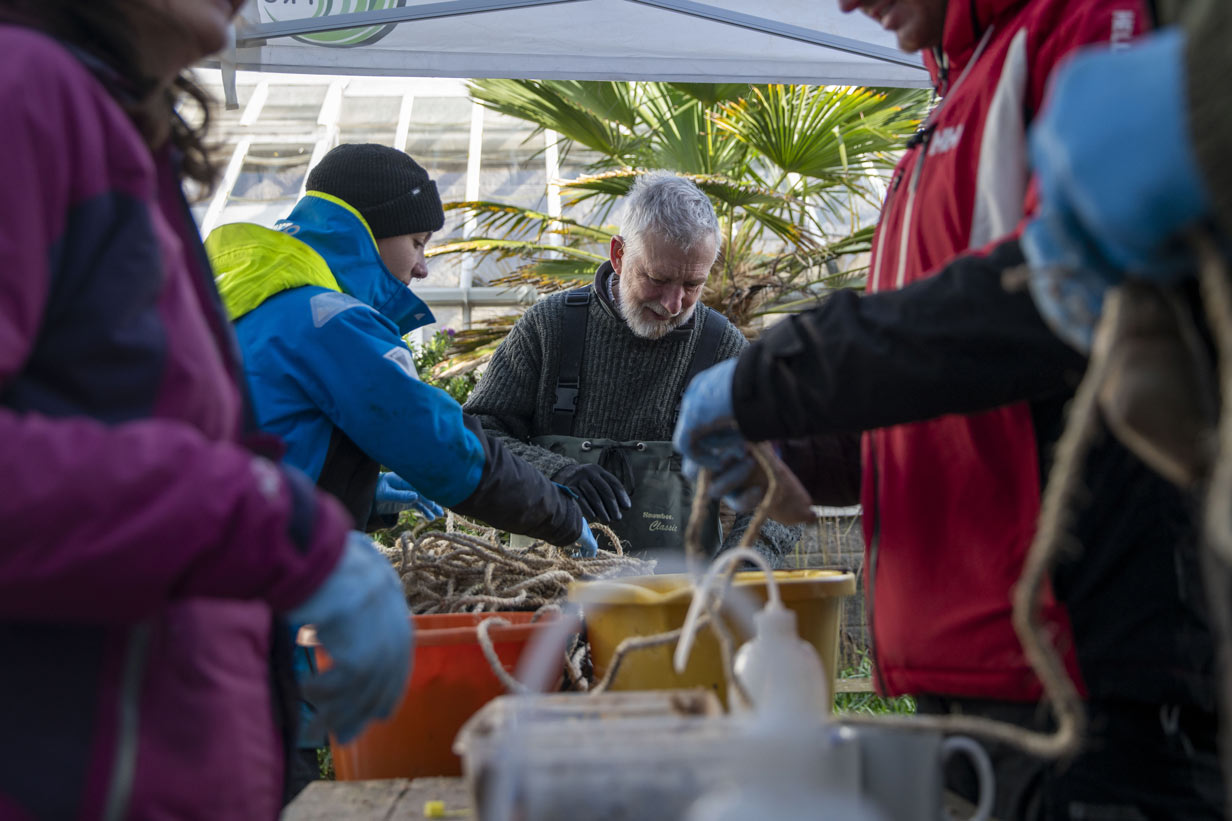 Guest blog by Mike Furness about his experience as a volunteer during seagrass planting week.

It was smelly; it was noisy; it was heavy; it was cold. It was buzzing, vibrant and invigorating. Overwhelmingly it was about camaraderie, enthusiasm and shared purpose, and all set on the beautiful Pembrokeshire coast.

At the end of February, I was privileged to be one of thirty or forty volunteers (the numbers varied daily) playing their individual parts in the climax act of a long-running, seagrass drama. We were going to help to sow a seagrass meadow, not just a small patch but a whole ‘field’. The logistics are daunting to think about; everything from feeding and accommodating the team to previously organising hundreds of school children to fill and tie 20,000 small bags on to 20km of ropes. Not to mention the harvesting and preparation of ¾ of a million seeds. An astounding effort. It would be wrong to say that everything ran flawlessly, but this is fieldwork and coping with the unexpected is part of the art behind the science, and the team coped magnificently. 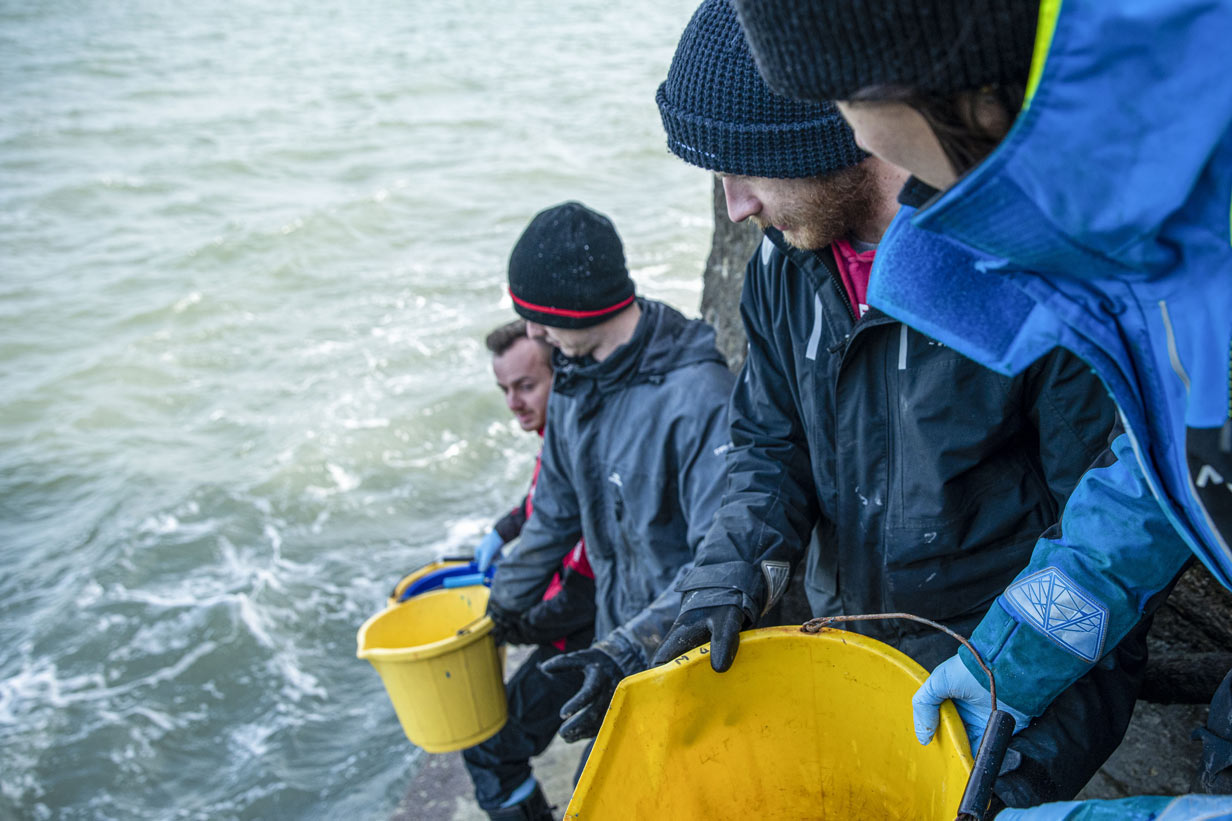 Immense teamwork both on land and at sea to get the seeds planted.

I was first introduced to seagrass by taking too close an interest in my daughter’s marine biology studies. Her thesis involved endless hours of studying underwater video of seagrass beds and sometimes I was allowed to help. I don’t think that anyone could watch the multitude of life in a good sward without becoming an advocate for the importance of this vital habitat. So, when Evie, my daughter, first mentioned the meadow-sowing project and that volunteers were needed, I knew I had to be part of it.

Arriving at Fort Dale on a crisp, blowy morning, with the wind at our backs, the smell wasn’t immediately apparent. The first impression was of organisation and industry; already half a dozen teams were bound together by their ropes, busily spooning seeds into pouches, topping them up, watering them and passing them on to the packer to carefully coil into a crate ready for soaking and dispatch to the boat team. Crates were rolling off the production line every few minutes, amid lots of banter and a backing track of 80’s pop classics. The productivity was impressive, but a quick glimpse into the temporary crate store quickly put this in perspective; this was a mammoth task. So, time to get stuck in. 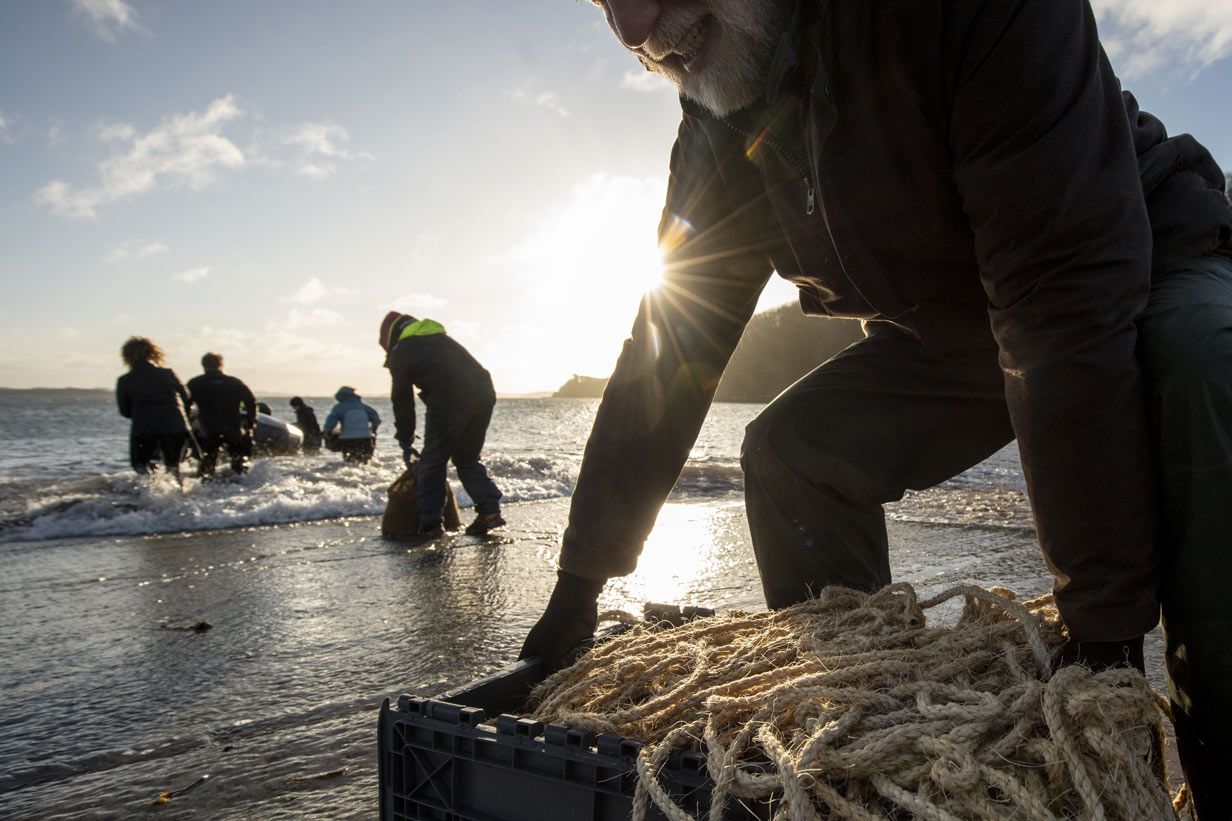 Mike getting ‘stuck in’.

Quick introductions and we were underway. Conversation develops as the task gets familiar. “Where are you from? What has brought you here? Are you studying, employed, retired? What do you do?” Being thrown into a group of thirty or more would be difficult. Working four or five to a rope quickly establishes relationships – friendships – everyone knew the value of the task, everyone wanted to be there, there’s a shared purpose, a common goal, and everyone is freely giving of their time and enthusiasm. And with lots of jobs to do, there is an easy swapping of roles and ropes and before long you know everyone. For someone like me who spends his working life as a one-man band, the teamwork was a breath of fresh air. Ah, yes, the ‘fresh air’… 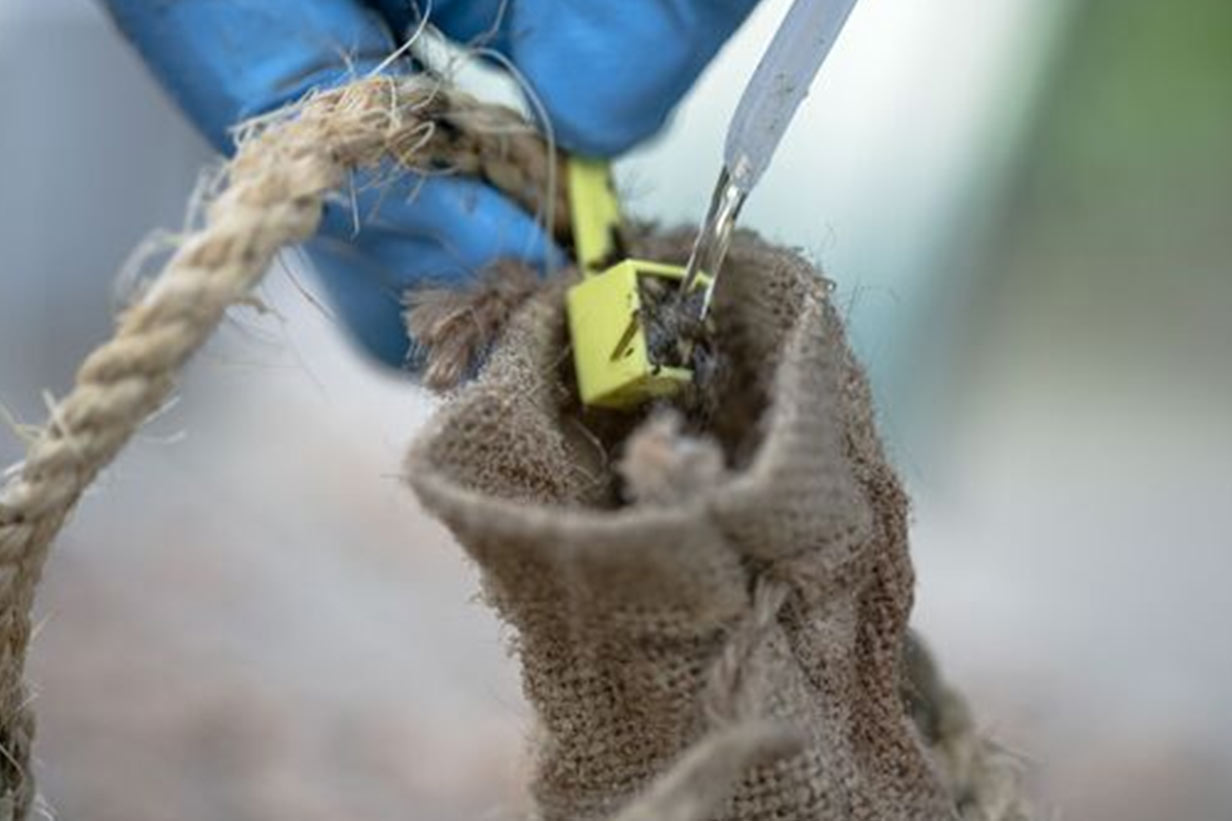 The seeds had been harvested in late summer and needed to spend several months rotting out of the harvested grass before being sown. By late February, they were ripe for planting and being kept in their own dedicated fridge. If you’ve ever walked through a geothermal area amidst the steam of fumaroles, you will know the smell that hits you when that fridge door is opened! It’s pungent. It’s sulphurous. It’s clinging. But, you know what, by the end of the day it virtually disappears. And on the morning of day two, when it hits you again, you begin to realise – that’s the smell of success, bring it on.

Would I do it again, spend four days with a great bunch of people, in a beautiful location, working together to achieve something so important? Hmm, let me think about it!