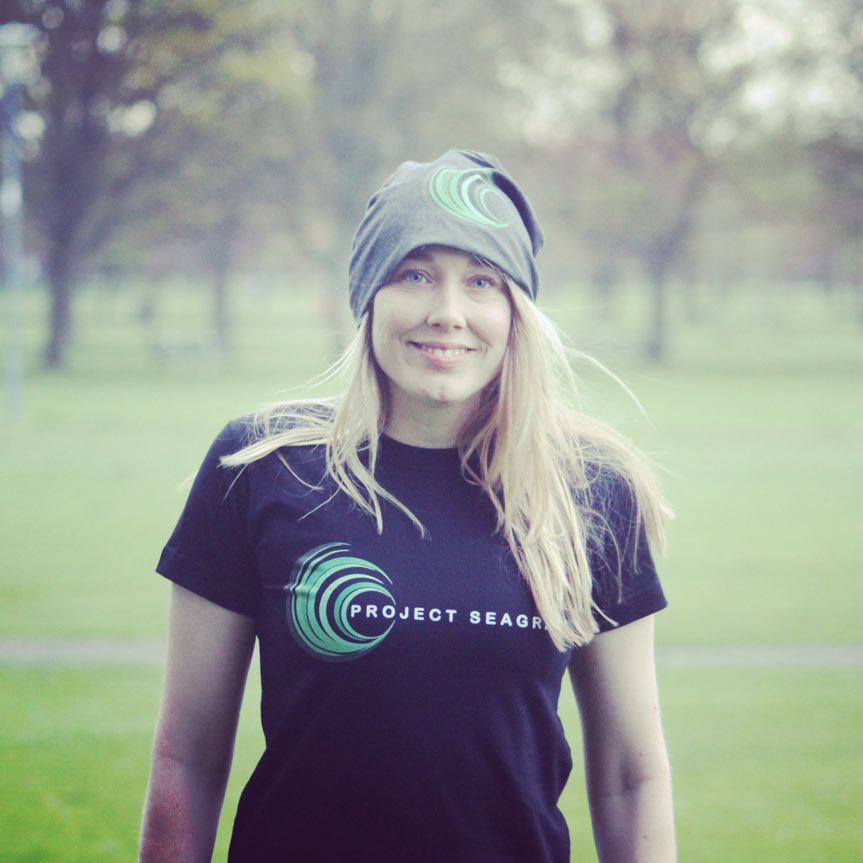 But that’s not all we’ve been up to this year. Since our ‘3 years of Project Seagrass’ blog last July, we’ve enjoyed making marine science matter at IMCC4 last August, right up to outreach at Ullapool Pier Day (blog to follow) just this last week. This blog is thus a celebration, and a review, of our 4th year as an officially seagrass focused entity!

So first up, and in a break from our usual seagrass focus, myself and Edd Hind-Ozan were involved in an innovative project with “Oceans Online” at IMCC4. The idea was to run a workshop which focussed on “Bringing fishermen to the table” at academic conferences. The aim was to achieve this using live stream “Bambuser” technology. Whilst this is a simple concept, I believe it is one that is long overdue. At marine conservation focused conferences and workshops, the importance of stakeholders is discussed frequently, whether it’s from developing solutions for community led MPA’s or improving fishing quotas – but the stakeholders are all to frequently absent from these high-level discussions. Oceans Online marked a pretty important development in making conferences accessible to all, especially considering a lot of commercial fishermen (from both developed and developing countries) cannot attend conferences because they are fishing! It was a privilege to be part of the beginning of a movement that looks to cultivate the ways marine science is conducted, shared and communicated online. Oceans Online will be returning on the 29th June 2018 for IMCC5 in Malaysia – so save the date!

Next up in August was the development of Scottish Seagrass Network and the official registration of Project Seagrass as a charitable entity in Scotland. As we entered our fourth year as an NGO, we thought this was a logical step for us, especially since within north-west Europe, approximately 20% of seagrass meadows are found within Scottish waters. 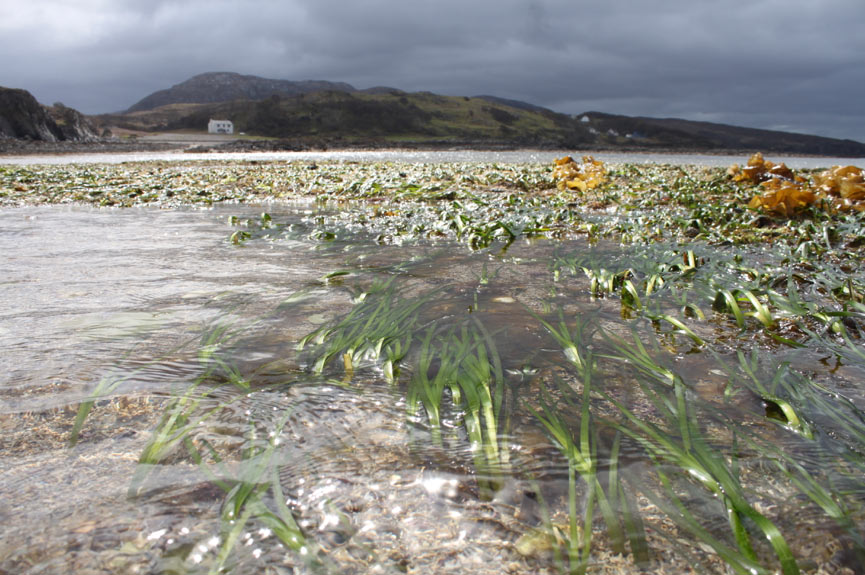 Within north-west Europe roughly 1/5th of seagrass meadows are found in Scottish waters.

In September myself and SJ managed to get over to the Scottish Association for Marine Science (SAMS) in Oban for some ‘Seagrass Spotter’ citizen science. The site we went seagrass spotting was Dunstaffnage Bay at the entrance to Loch Etive on the West Coast of Scotland. Beyond the eelgrass meadow already known to SAMS there was not much to report.

Meanwhile, in Swansea, Wales the team from HQ in Cardiff were busy running a Seagrass Education and Awareness stand at the British Science Festival. The festival’s began in 1831 in York, England and have run through to this festival in Swansea which marked the 177th meeting of the British Science Association. 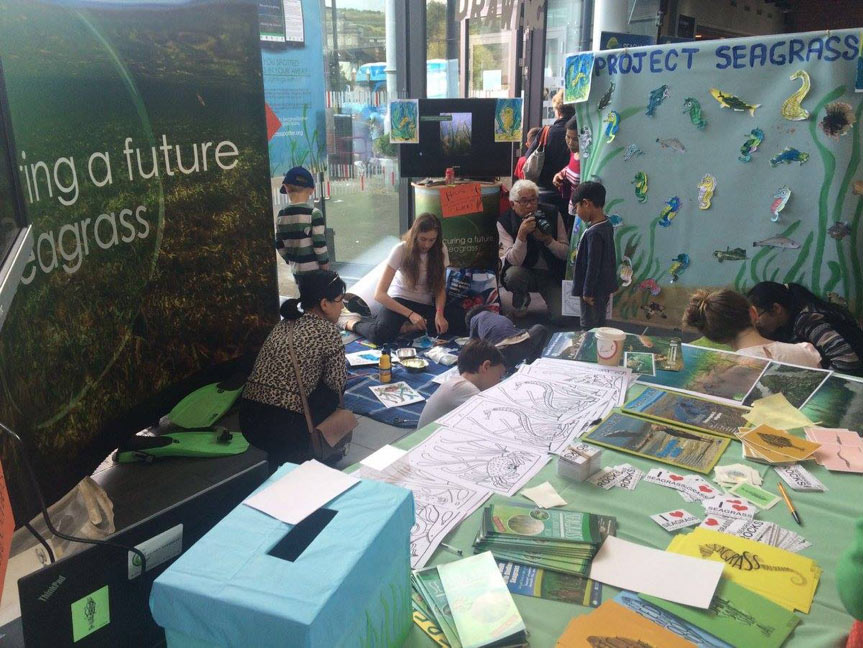 Project Seagrass at the British Science Festival in Swansea, Wales.

This month was clearly ‘the big one’ in our calendar, and what a brilliant event the 12th International Seagrass Biology Workshop turned out to be. Our intern Evelyn Furness remarked on just how friendly “Team Seagrass” turned out to be and I think all delegates were impressed at both the diversity and quality of seagrass science that is now taking place globally. I’m sure that ISBW13 in Singapore will be an absolute cracker of a conference! 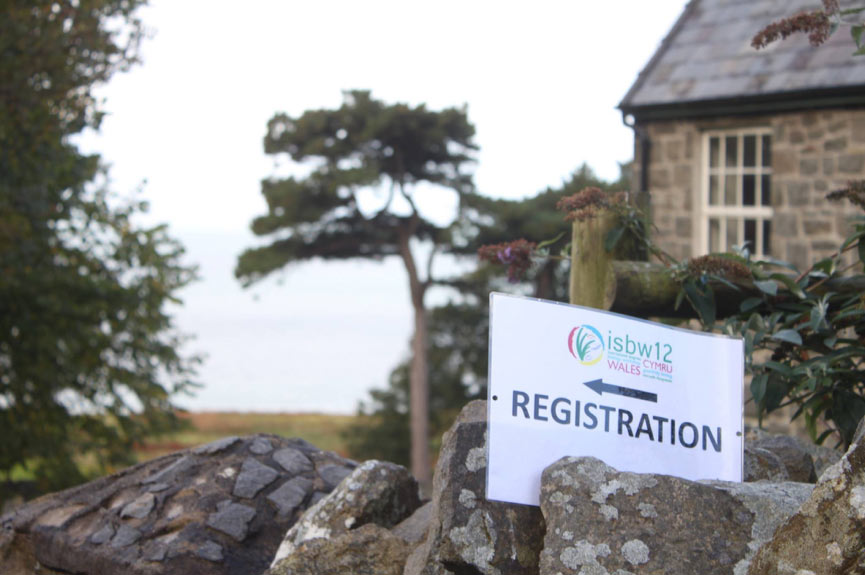 You’d be forgiven for thinking that November would be a prime opportunity to take our foot off the gas after the efforts that went into hosting ISBW12, but conversely, we were really keen to build on the momentum and enthusiasm generated at ISBW12, especially the passion shown for our smartphone app Seagrass Spotter. For this reason, we put all our efforts this month into ensuring that Seagrass Spotter was developed and enhanced from being a smartphone application that was only available in the British Isles, to one that was functional across Europe, and in particular, that it be made accessible to as many delegates as possible from across the Mediterranean region. 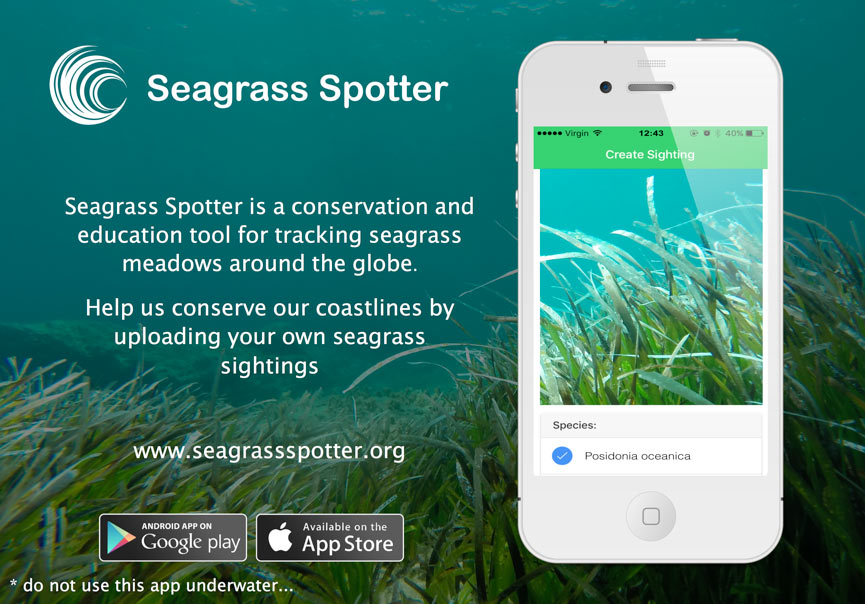 Seagrass spotter was made available to users in the Mediterranean Sea

November was also the month that SJ announced she would be running “Three marathons before I turn 30” in a bid to raise vital funds for Project Seagrass.

Building on our traditional Christmas advent calendar, this year we created a “virtual” calendar for you all to enjoy. Behind each door of our calendar is one of #SantasSeagrassSecrets introducing you to the weird and wonderful uses and functions of seagrasses across the world.

The new year started with a reason to celebrate! Participation in SeagrassSpotter had rocketed since its expansion and we now had over 400 seagrass sightings from across the North Atlantic Ocean and Mediterranean Sea! What’s more, we had the good news that Andrew Lewin was keen to support Team Seagrass on his Speak Up For Blue website, with each of the plenaries from ISBW12 to be shared from his website. The first of these was Ocean Optimism on the Future of Seagrass Meadows on January 3rd but he continued to share one plenary / blog combo through until March (Check them out at www.speakupforblue.com).

Each January I also take the time to head down to the BETT show as I seek inspiration for the best ways for us to improve on our SEA (Seagrass, Education and Awareness) programme. Towards the end of the month, Ben attended a meeting in Bangkok, Thailand, to discuss the final developments to “The Dugong & Seagrass Research Toolkit”, which we’ll discuss later. Richard headed to Puerto Rico, where he led the Swansea University Tropical Marine Ecology field course. Here he used the opportunity to test the capabilities of Seagrass Spotter in a tropical environment and paved the way for scientific seagrass spotting by conducting the activity along transects.

March is Seagrass Awareness Month and so a busy time of year for anyone involved in seagrass science and communication! This month Ben headed to Mexico as part of a ‘Land 2 Coast’ project with Cardiff University. Here he conducted two Seagrass Spotter Co-Development workshops with Manatus Mexico, a local NGO, and XTC Dive Xcalak a local Dive center.

March was also a big planning month for Jake Davies who has been assisting us with seagrass research in North Wales. Jake has planned a summer of BRUV deployments (starting in April) where he’s tried to get a few deployments every week depending on the weather (which has been a challenge!). Some of these interesting clips he’s shortened and placed on the National Trust TV screen in Caban griff down in Porthdinllaen. These clips he has edited to have species names and information about seagrass and links for more information. Check out his clips on the Welsh Seagrass Network twitter feed.

April was a busy month! In April Jake also applied for a sea-changers grant to create the ‘Dive into monitoring: Seagrass 2017’ volunteer diving project. The project is going to be part run with Seasearch north Wales and hopes to set up monitoring stations which local divers and clubs can go back to year on year. It also revisits the work which was carried out from 2008-2012 by Countryside Council for Wales which also used volunteer divers.

We had a solid week of outreach activities at the Edinburgh International Science Festival and it would not have been possible without the help of some fantastic volunteers. A big THANK YOU to Evie Furness, Rufus Sullivan, Laura Coomber, Lauren Skye Clayton, Dani Whitlock and Sarah Jane Pope for volunteering their time to help us deliver this event. It was a massive success and has enable the development of relationships with several educational centres, including the Scottish Seabird Centre in North Berwick.

In April I also managed to get across to the Hebrides. First I headed to Skye to meet with the South Skye Sea Initiative a community based project for the conservation of Loch Eishort, Loch Slapin and Loch Scavaig. Myself and Evie were able to get out at low-tide and map some of the seagrass in Loch Eishort and also to drop some Baited Remote Underwater Video stations despite the inclement weather! One of the things that struck us both during our stay was just how much plastic there was littering this beautiful island. Second was a trip over to Mull and Iona, this was purely a trip to scope locations where there was potential for seagrass meadows to occur, and of course to spread the seagrass word!

April was also the first of SJs marathons, the London Marathon, in her ‘Three Before Thirty’ challenge! 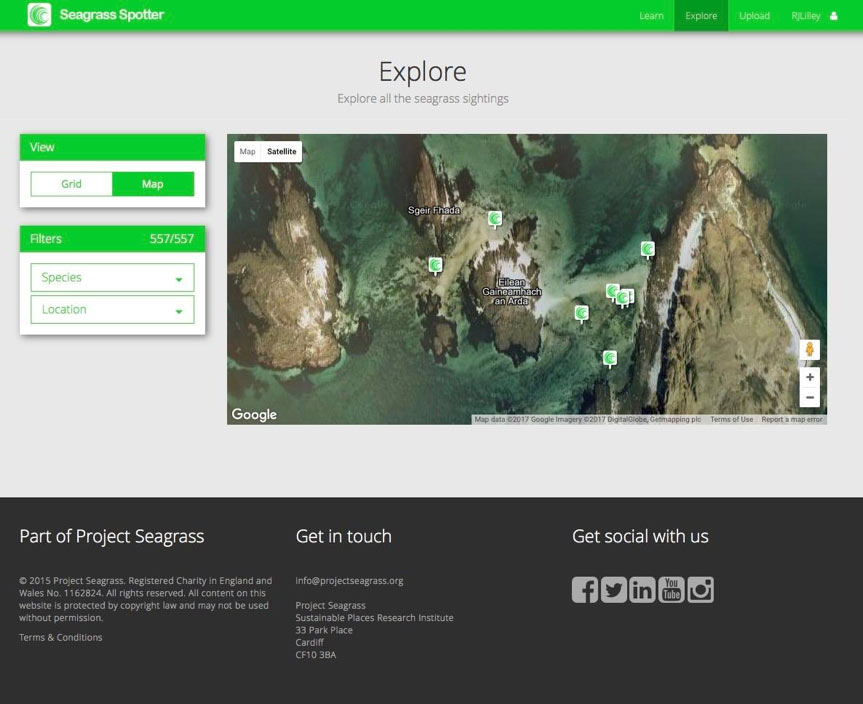 We managed to spot plenty of seagrass near Ord on Skye, Scotland.

In May SJ ran the second of her three marathons, the Edinburgh Marathon. On what was a warm and muggy day the conditions were not at all good for running, but she stepped up and completed it all the same! Impressive.

Ben headed to Indonesia to check on the Cardiff Universiy / Swansea Uni project Forkani, here we have been working with local partners, to design an innovative scheme to reduce sedimentation on local seagrass meadows in the Wakatobi. This has largely been achieved by planting trees along rivers that both improved the environment, water retention, and provide financial gain (in fruits) to local land owners. Small project has sparked major interest in the region, with government keen to make it large scale.

Richard headed to Dubai to officially launch the Dugong and Seagrass Research Toolkit.

In what has to be one of my favourite Project Seagrass creations to date, the month of May saw the launch of ‘The fishes in the seagrass‘! This video (available on YouTube) is a seagrass inspired version of the children’s classic tune ‘Wheels on the bus’. Huge thanks have to go to Amy Bruning for her brilliant Animation and Rebecca Cullen for her Music! 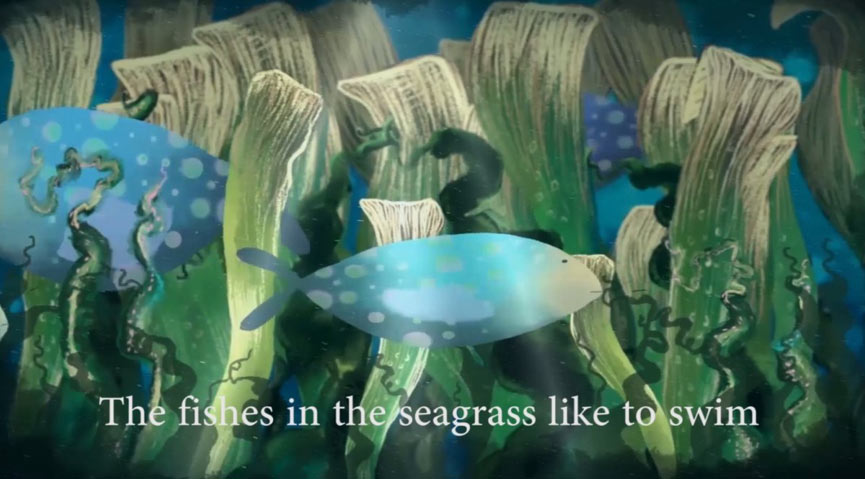 The fishes in the seagrass video has been a big hit!

The beginning of June saw the final of SJs ‘Three Before Thirty’ marathon challenge, the Stockholm Marathon, and the end of eight months of training! In what has been our biggest volunteer fundraising effort to date, SJ raised over £2000 for Project Seagrass to enable us to continue our seagrass education and awareness projects both in the UK and overseas.

The second half of the month was all about the Glasgow Science Festival which was an even better day than it was last year. I am always impressed by the enthusiasm of the staff at this festival which gives the whole operation a really feel good vibe!

Finally, in this last month we have been up in the Wester Ross Marine Protected Area at the Ullapool Rotary ‘Round The Pier Day’ in collaboration with Ullapool Harbour Trust. Here we were hosted in a marquee on the harbour by Scottish Wildlife Trusts with guests from some of the best and most exciting wildlife and nature projects happening in the area and throughout Scotland. 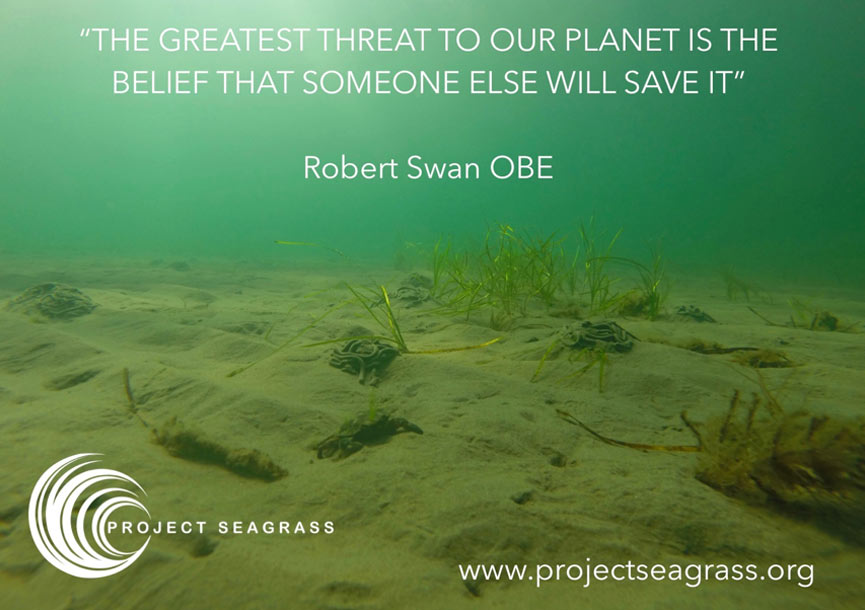 Keep the focus Team Seagrass, every day we change the world, just a little bit, for the better.

So that’s our year in review! I hope it fills you with Ocean Optimism! I certainly am feeling decidedly optimistic, especially after the launch of the Seagrass Restoration Network last month. Now, this is an organisation we can all be excited about!