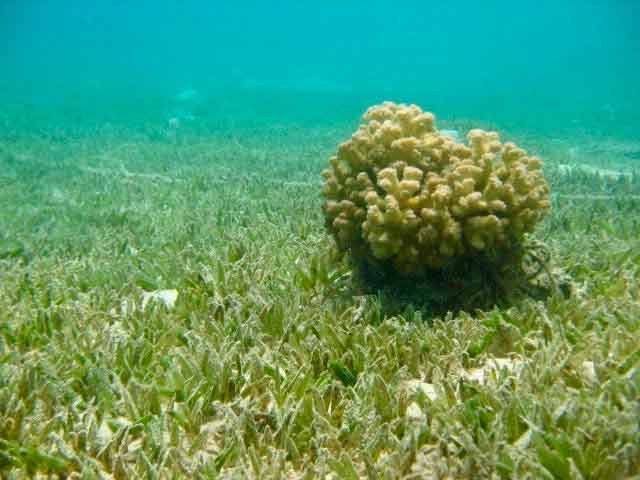 I was recently ‘nudged’ to do something by a fellow seagrass enthusiast who shall remain nameless for the time being! I must admit that I have been distracted by life and other ‘things’ for several months and desperately needed that ‘nudge’ to get going again. So, with March being Seagrass Awareness Month, I decided to briefly explore the world of Egyptian seagrasses.

To first set the scene, I will give some details about my weird but, although I say it myself, wonderful past. This may partially explain the whys, whats and wherefores of this particular prose! Some 20 years ago (already 20 years, I ask myself?), being a keen but inexperienced scuba diver with a coastal and marine management MSc under my belt, I discovered that Marine Conservation Society ran two-week coral reef survey expeditions to the Hurghada area of the Egyptian Red Sea. I jumped at the chance to participate and dive into tropical waters for the first time. It was a very steep learning curve, both in terms of my scuba skills and my general marine survey and ID skills.

To cut a long, weird and wonderful story short, I ended up working in Egypt mostly as a diving instructor and, when the opportunity arose, as a citizen conservationist. Nowadays, I am slowly but surely extricating myself from Egypt’s steely grip and spending my time between there and the UK, looking for an opportunity that will satisfy my eternal curiosity about our oceans and that will offer future prospects and stability (a sign of my age, I think!). I began taking an interest in seagrasses around 2009, mainly because they are feeding grounds for dugongs, green turtles and other slightly strange-looking critters. The love affair began in earnest about a year ago! 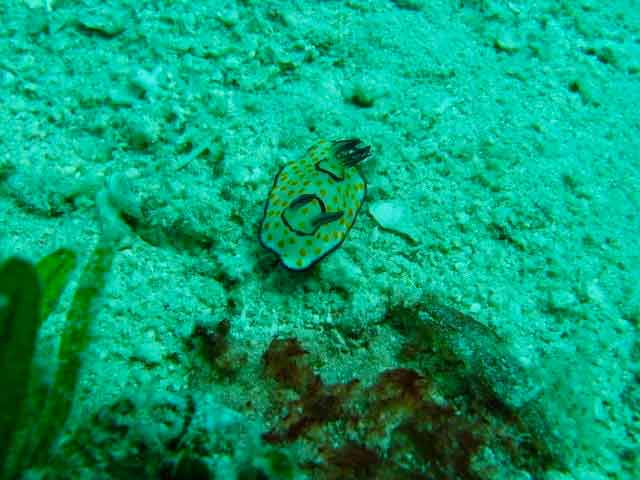 Seagrass meadows are often full of weird and wonderful creatures such as this colourful nudibranch (Photo: Jessica McGarty)

And now back to the matter at hand … Egyptian seagrasses! Egypt has two coastlines, one bordering the Mediterranean Sea and one bordering the Red Sea, the latter being where I will try to focus. Both coastlines feature your hero and mine: seagrass. I’m not a trained biologist or ecologist, tending more towards social sciences, so I thought it would be good practice to boost my knowledge and review some of the scholarly works relevant to seagrasses of the Egyptian Red Sea littoral.

The first point of call was Google, the search terms “Egypt” and “seagrass”, and I was interested to find seagrass products from Ikea and scant information about the real deal living in the ocean. I widened the search to “Red Sea” and “seagrass” but found papers relating to other countries bordering the Red Sea with some familiar names attributed to them. It was the same result when I consulted the World Atlas of Seagrasses (2003). This pioneering work, edited by Green and Short, did detail that there are 11 tropical seagrass species in the wider Red Sea area, namely Halodule uninervis, Cymodocea rotundata. Cymodocea serrulata, Syringodium isoetifolium, Thalassodendron ciliatum, Enhalus acoroides, Thalassia hemprichii, Halopliila ovalis, Halophita ovata, Halophila stiputacea and Halophila decipiens.

Several hours later, information was still not forthcoming, so I read the few documents I had gathered using various search engines, both general and academic, and numerous search terms. One report in particular was informative, namely El Shaffai’s Field Guide to Seagrasses of the Red Sea (2011), also describing a twelfth species, Halodule pinifolia. This field guide describes all 12 species of seagrass that are found in the Egyptian Red Sea. Now I know I have absolutely no excuse for not being able to identify Egyptian seagrasses down to species level! 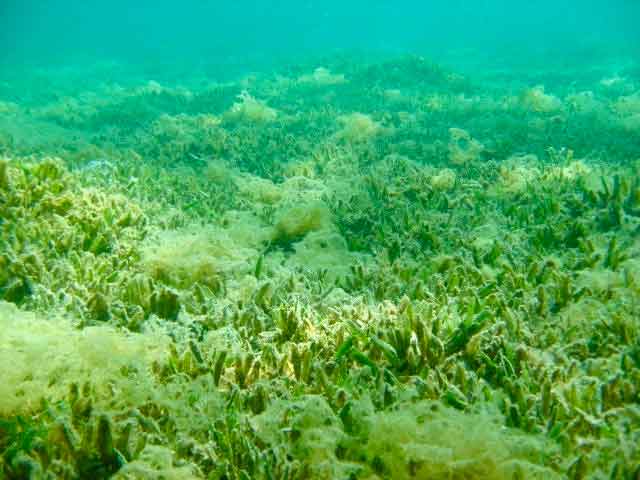 A more detailed study of the ecology, distribution and density of seagrasses in Wadi Gemal National Park, southern Egypt, was undertaken by El Shaffai, Hanafy and Gab-Alla in 2014. Additionally, Osama (2010) attempted to use remote sensing to assess distribution in the Hurghada area and highlighted some of the factors affecting seagrass abundance and diversity. Thinking out loud, I wonder whether the power of remote sensing can be fully harnessed to map the distribution and extent of Egyptian seagrasses? It will be a good starting point for management and protection of these habitats that are so vital to environment and society.

A further paper from Khalafallah et al (2015) also indicated some of the ecosystem services provided by seagrasses and detailed their diversity and abundance at four sites in Hurghada and Safaga. This paper recognised the current limited knowledge about Egyptian seagrasses, as did Osama in 2010, and the importance of coastal zone management to help lessen harmful impacts upon them. 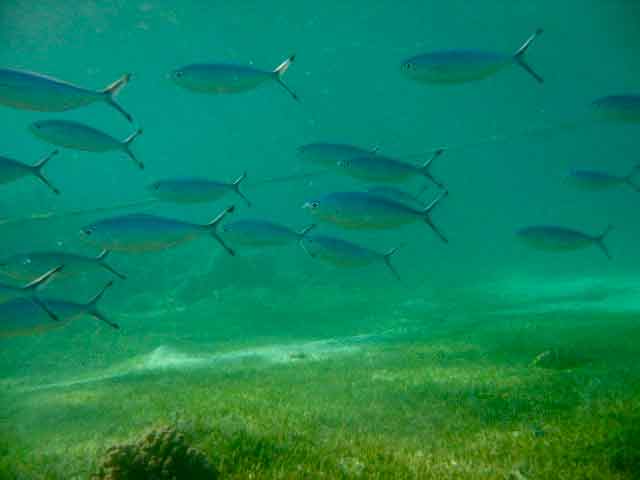 It is clear that much work needs to be done to ensure the survival of Egyptian seagrasses, as coastal development continues at a fair rate of knots and with that comes additional nutrients, sediment and rubbish that may overload seagrasses and inhibit their valuable functions and services to society. Not to mention, tourists and local communities unwittingly causing damage through trampling, boating and fishing. Any scientists interested in furthering the cause of Egyptian seagrasses will have a willing assistant in myself, whether they like it or not! 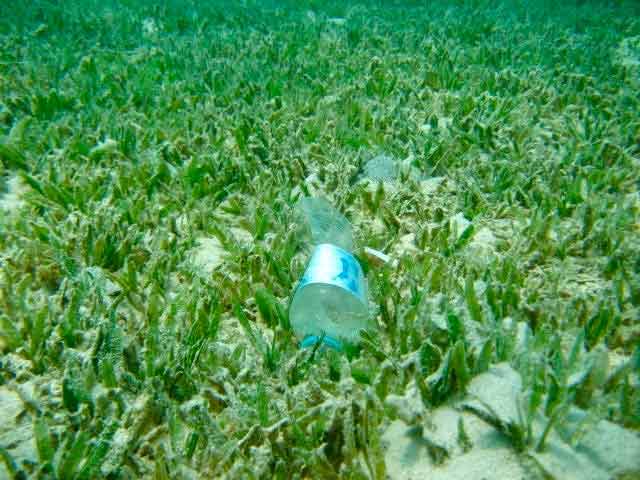 It is a rare site these days when you don’t see plastics in a seagrass meadow (Photo: Jessica McGarty)

In an attempt to stimulate interest, I always try to persuade guests and colleagues alike to come for a dive with me over the seagrass at Voodoo Divers’ house reef in Hurghada, but my success is limited. However, it was heartening a couple of weeks ago whilst out for a ‘staff dinner’. My friends and colleagues briefly chatted about seagrass over dinner (a conversation instigated by yours truly!), with someone even mentioning that she had taken an interest and learned some important facts because of my enthusiastic praising of seagrass! She wasn’t joking either!

The seagrass meadow at Voodoo Divers’ house reef is flourishing and full of interesting creatures, making it a great snorkel or dive spot. I missed the chance of taking photographic evidence of the resident double-ended pipefish (Trachyrhamphus bicoarctatus) which I saw recently (that old chestnut, I hear you say!). But have some unedited highlights of this special marine plant and the creatures that inhabit it, taken with my pre-historic Powershot A540. Enjoy the journey into superpowered seagrass …

El Shaffai, A A. 2011. Field Guide to Seagrasses of the Red Sea. Eds: Rouphael, A and Abdulla, A. First Edition. IUCN, Gland, Switzerland and Total Foundation, Courbevoie, France.

Khalafallah, A A, Sheteawi, S A, Geneid, Y A, Essa, B S. 2015. Assessment of the Ecological and Physiological Status of Seagrasses in Representative Habitats at Hurghada and Safaga Provinces, Red Sea Coast, Egypt.